A new movie hero was born: THE EXTERMINATOR, the green knight, who with his superpowers from now on day by day will help the ones who call for him. With the creation of this action figure, we have created a long term image for the BIOLIT brand. 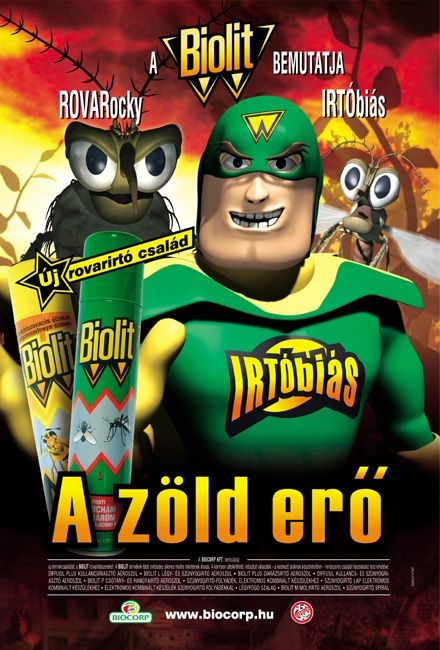 A new movie hero was born: Biolit’s Green Knight, whose grand deeds will impress anyone that calls for his help.
By creating the superhero character for the Biolit insecticide family, we have laid the foundations of a long-term image for the brand.

The colors of the brand are reflected by the outfit of the superhero figure, helping to communicate the image of the new product family. At the core of the campaign, there was a 15-sec 3D animated commercial. Contrary to the advertising of traditional insecticides, the focus of the campaign was repellent rather than the killing of the insects. It was part of the concept to build an image more friendly than the sometimes overly aggressive message preferred by competitive brands.

TV commercials were complemented by a giant poster and City Light campaign, which facilitated the embedding of the new brand in the market. The elements of the outdoor image campaign – movie-poster-like graphic and typographical solutions – support the introduction of the Biolit character as a superhero. In terms of the promotion campaign, we made a supplementary booklet for each product, with which you could easily win a Biolit refrigerator magnet.

BAKING STARTS WITH LOVE—AND A GOOD RECIPE!CREATIVE BEHIND THE “GREAT RAMA BOOK” SCORES FURTHER SUCCESS IN THE CZECH REPUBLICA LADYBUG'S VICTORYIN HARMONY WITH NATURETHE MOST BEAUTIFUL HERENDI PORCELANIUM ADVERTTHE BIG WEIGHT LOSSWE'VE GOT PAYA, THE WINNERIPULI, YOU'RE THE BESTAND THE SECOND PLACE GOES TO... THE HEREND BUTTERFLY